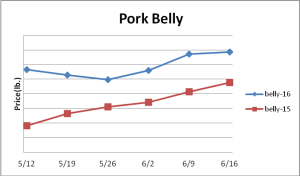 Pork output last week rose 9.6% from the prior Memorial Day week but was 1.7% less than last year. Seasonally declining pork production may underpin pork prices in the near term. But pork output is expected to rise this summer from the spring by its largest level since 2009 which should weigh on pork prices. That said, pork export demand could remain solid due in part to tight supplies in China. The country typically accounts for half of the world’s pork consumption. U.S. pork exports to China during April were up 95% from 2015.